It’s been an encouraging week, with two trips to London.

On Tuesday, I learned from the UK Plant Science Federation (http://www.plantsci.org.uk) that there had been a total of 145 applications from undergraduate students for 4 Defra-funded Plant Health summer studentships. Though obviously disappointing for the unsuccessful applicants, this shows a clear demand and student interest in plant health, which is brilliant.

On Thursday, I went to the RHS Chels 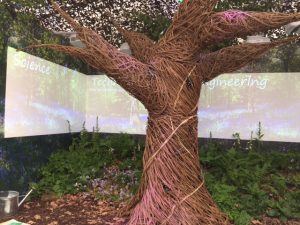 ea Flower Show (https://www.rhs.org.uk/shows-events/rhs-chelsea-flower-show) and was really pleased to see a good spread of science represented in the Discovery Zone with stands from the Animal and Plant Health Agency; the British Ecological Society, Kew Gardens and CABI. I last visited the show in 2011, where the only academic science represented was Horticulture from the University of Reading and engineering from the University of Sheffield. Image shows The Animal and Plant Health Agency stand on STEM (Science, Technology, Engineering and Maths).

I was also impressed that the Maltese show garden was selected as the best show garden. It was a brave move to applaud dry gardening in this way, and one that was bound not to appeal to everyone, but which shows the vulnerability of landscapes to high temperatures and low water availability – a scenario that could become more widespread.

Given the reach of the Chelsea flower show through TV and other coverage, it is really encouraging to see some of the global plant science challenges and a greater awareness of the professional roles and work of plant scientists presented to this broad audience.

This website uses cookies to improve your experience while you navigate through the website. Out of these, the cookies that are categorized as necessary are stored on your browser as they are essential for the working of basic functionalities of the website. We also use third-party cookies that help us analyze and understand how you use this website. These cookies will be stored in your browser only with your consent. You also have the option to opt-out of these cookies. But opting out of some of these cookies may affect your browsing experience.
Necessary Always Enabled
Necessary cookies are absolutely essential for the website to function properly. These cookies ensure basic functionalities and security features of the website, anonymously.
Functional
Functional cookies help to perform certain functionalities like sharing the content of the website on social media platforms, collect feedbacks, and other third-party features.
Performance
Performance cookies are used to understand and analyze the key performance indexes of the website which helps in delivering a better user experience for the visitors.
Analytics
Analytical cookies are used to understand how visitors interact with the website. These cookies help provide information on metrics the number of visitors, bounce rate, traffic source, etc.
Advertisement
Advertisement cookies are used to provide visitors with relevant ads and marketing campaigns. These cookies track visitors across websites and collect information to provide customized ads.
Others
Other uncategorized cookies are those that are being analyzed and have not been classified into a category as yet.
SAVE & ACCEPT